Would You Rather: Godwin vs. Evans | Jones vs. Ridley

Over the next several weeks, we will be taking a look at two different players; either on the same team as part of a desirable fantasy offense, or two players close in ADP (average draft position). The goal is to answer the following question: “Would you rather take Player X at this ADP, or Player Y at that ADP?”

This exercise is particularly helpful in fantasy football drafting to help prepare in real-time for when the desired player gets “sniped” by another fantasy owner in drafts.

After getting started with a fierce debate on Bucs WRs Chris Godwin in the second, or Mike Evans in the third round, we go over another pair of talented wideouts on the same team in today’s “Would You Rather?”

SI Fantasy analyst Bill Enright will be making the argument that Atlanta Falcons wide receiver Calvin Ridley in the fourth round is the better overall pick based on talent, projections, and value. I will make the counterpoint argument for his teammate Julio Jones in the second round. 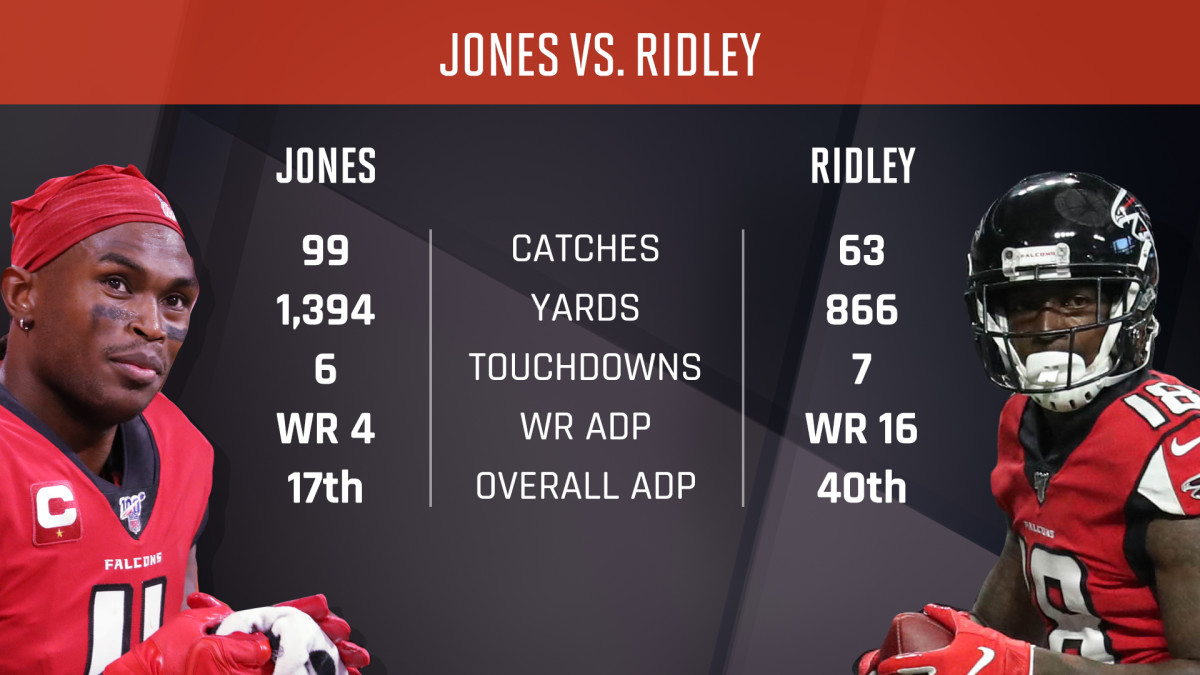 Ben Heisler’s argument for Jones over Ridley based on ADP

Getting older can be a scary thing. Especially if you’re a wide receiver on the wrong side of 30.

Not all wide receivers are Julio “Fricking” Jones.

Now, Austin Hooper and his 97 targets have headed north to Cleveland leaving even more bountiful opportunities for Jones to see the ball.

Jones will continue to extend his career in an offense perfectly suited to pad his stats. Last year, nobody completed more passes than his quarterback Matt Ryan, who also finished third in total pass attempts in 2019.

Calvin Ridley is a terrific Robin to Julio’s Batman, but the WR23 in PPR a season ago is just not an adequate substitute a few rounds later for me. Julio each year, even with limited touchdown equity remains one of the most consistent, quality talents each year in fantasy football.

And for those of you want to make the argument that Julio is going to slow down in 2020? He’s still one of the fastest players in the NFL, reaching upwards of 20.60 mph from late November of last year.

Julio Jones is one of the most dominant and productive wide receivers in the NFL for the last eight seasons, yet drafting him in the late first or early second round of fantasy football drafts is a big mistake.

Sure, Jones’ stat totals at the end of the season are impressive: more than 1,390 yards and over 80 catches in six straight seasons. Yet when comparing Jones to some of the other elite receivers in the NFL, there are two noticeable differences. First, there’s the lack of scoring. Jones hasn’t eclipsed eight touchdowns since 2012. DeAndre Hopkins, Davante Adams, and Tyreek Hill (all have similar ADPs in 2020) have exceeded Jones TD total on a per-season basis. In fact, Jones’ 23 scores ranks 12th among receivers with more than 200 catches since 2016. At that same time, Adams has 40, Hopkins has 35, and Hill has 32.

The second factor is Jones’ per-game fantasy points average. Unlike the upper echelon of NFL receivers, Jones has a tendency to disappear in a handful of times a year. His consistency rating falls outside the top 12 while teammate Calvin Ridley is inside the top 8.
Jones scored eight points or less six times in 2019, that’s just inexcusable for a receiver regarded as an elite WR1. Meanwhile, Ridley had just four games of less than eight points.

Would You Rather Julio Jones or Calvin Ridley?

Ben Heisler: Julio Jones  in the second round
Bill Enright: Calvin Ridley in the fourth round