Let’s sink our teeth into one game… But first, there are four contests remaining this week where both teams having winning records: Eagles-Vikings, Texans-Chiefs, Lions-Packers and the game I’m focusing on this week: 49ers-Rams.

Despite all the talk lately focused on the San Francisco 49ers’ offense and their perfect record, the Rams find themselves as a 3-pt favorite in Vegas. Considering San Fran’s run game obliterated the Browns last week, the 49ers have established themselves as a team that wants to line up to beat you up-front, move the pile and mix-up their zone run attack to then open it up with play-action passes. It’s been a pleasure to watch thus far.

However, keep an eye on the Niners’ defense today. San Fran has a +3 turnover differential (Rams are at -4). The 49ers have only allowed 57 points thru four contests (14.2 ppg / 4th-best). SF ranks second in pass defense (175.8 ypg) and fifth in run defense (81.8 ypg). The only other team within the top five in both these categories is the Patriots. Are the Niners really on that level? I suppose we’re about to find out! With Todd Gurley already ruled out, the 49ers’ secondary may be able to key on Cooper Kupp while the pass rush “pins their ears back” to get after Jared Goff.

Our resident ranker and keep of in-depth analysis Shawn Childs isn’t especially high on RB Malcolm Brown this week (24th-ranked RB PPR). Since his two-TD Week 1 performance, Brown has been relatively quiet in a limited role. This lack of playing time says more about LA’s confidence in a healthy Gurley up to this point though. With Gurley out, will the Rams pivot toward rookie RB Darrell Henderson? All that preseason hype he received as a potential sleeper seems like a million years ago already.

Did you know we offer our subscribers customizable rankings backed by Shawn Childs’ algorithm-based, stat-driven projections? Or you can simply use our free weekly rankings. If you’d like to subscribe, use promo code RDA19 for 25% off of your monthly subscription.

What will win the game for the Rams? Of course it is their stud playmakers (Kupp, Robert Woods & Brandin Cooks). This WR trio has combined for 144 targets, 92 receptions, 1,185 yards, 58 first downs and five TDs. The Rams are passing the ball at a 66.7% rate. If Goff finds them early and can put points on the board, that would really derail San Francisco by dictating the gameflow. Taking the Niners out of their run-first, play-action focused offensive attack is really the name of the game here. We’ve seen what happens when the Rams start carving teams up offensively. In contrast, the 49ers are passing the ball only 43.4% of the time. Keep an eye on these respective playstyles and how the coaching staffs adjust to camouflaged tendencies.

So who will win?

Subscribers to our sister site, Vegas Whispers would have access to Frankie Fantasy’s pick for this game . Subscribe now to the ‘weekly pass’ using promo code HOT50 for 50% off your first week with the site.SUBSCRIBE TO VEGAS WHISPERS! 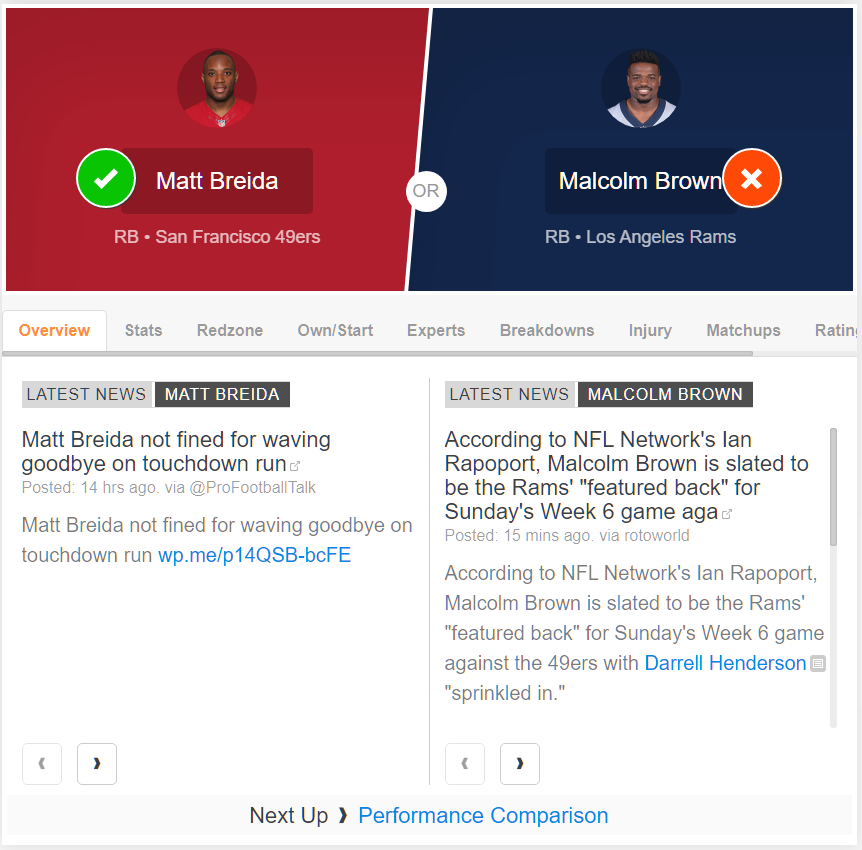 SUBMIT YOUR QUESTIONS TO OUR EXPERTS

If you prefer a more personal expert approach to making those tough decisions every week, head over to FullTime Fantasy’s premium season-long forum. Dr. Roto, Adam Ronis & Shawn Childs are available at all times to our season-long subscribers, including every Sunday leading up to kickoff. No question too big, no question too small. We’re here answer all your fantasy football questions! Sunday mornings are always very active in our community!